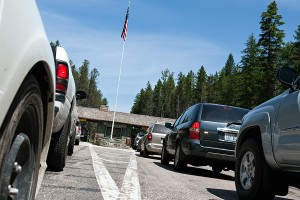 In Glacier National Park, where crowds arrive like a flash flood once Going-to-the-Sun Road fully opens, heavy traffic was once again a noticeable sight in the main corridor. Some vehicles were even waiting at spots along the Sun Road for hours at a time on many days to gain parking at Logan Pass Visitor Center, which regularly fills up before noon during summer.

As park officials are starting to realize, this could be the new norm in America’s most popular outdoor attractions like Glacier, which set an annual record for the second year in a row in 2015 and ranked 10th in terms of top visitation among all national parks.

Jeff Mow, superintendent at Glacier Park, is preparing his staff for another potential record-breaking influx over the next nine months. Mow said it is not hard to imagine the overall attendance jumping 20 percent this year, which would be an unprecedented spike.

“If there’s not a lot of fire and smoke, we’re going to be prepared for that 20 percent,” Mow said. “We’ve never seen 20 percent in one year. We don’t know what that looks like.”

Attendance across the board is expected to rise this year specifically because it is the NPS centennial, which is drawing added attention to the nation’s 409 parks. Also, the economic recovery and low gas prices are driving domestic travel, while increased marketing efforts appear to be largely succeeding.

This scenario is leading park officials to devise clear strategies for large crowds, including how to re-route traffic and maintain resources. Last year’s raging wildfires forced temporary closures of sites and the Sun Road, which provided a learning opportunity, Mow said. Amid unseasonably dry, hot conditions that sapped the region’s snowpack earlier and faster than usual, Logan Pass nearly ran out of water, leading park officials to prepare an army of porta-potties as a worst-case response.

“It was really hard on the staff when we had to evacuate St. Mary. It will be easier for folks this year because we’ve been through the drills recently,” he said.

Glacier is receiving $190,000 from the NPS for the expected boost in visitation because of the centennial. Mow said he is devoting those funds to hiring more employees during the peak of summer.

By early summer, park officials expect to release the recommended alternatives of the Sun Road Corridor Study, a multi-year planning effort focused on addressing increased visitation and congestion along the main thoroughfare. The list of options includes expanded parking, a larger fleet of free shuttles with fleet management software implemented, and controlled vehicle entry through a reservation system.

Indeed, Glacier Park is big business for Northwest Montana and the park’s public persona and status are heavily linked to the local economy.
Marketing efforts have increased in recent years to capitalize on Glacier Park’s status as a global icon. Now Mow said the park is discussing with community leaders and marketers ways to expand the reach of tourism in the region.

“I think what’s critical with all of this is thinking about what that visitor experience is like,” he said. “For folks who don’t want delays, they need some alternatives. We’re really interested in working with the Forest Service and the (chambers of commerce) to let folks know we may see congestion this year. If you want to go to Logan Pass, maybe come back later in the day or in the evening. For some people, there won’t be an option and they don’t mind waiting.”

Tia Troy, communication manager for Glacier Country Tourism, characterized Glacier Park and the Sun Road as quintessential attractions, while also pointing out that this region does have an abundant supply of other unique amenities.

“While there are certain parts in Glacier National Park that are nearing capacity during our peak visitation times in July and August, there are so many other places to explore both inside and outside of the park,” said Troy. “We’re looking at this as an opportunity to introduce visitors to more unexplored and underutilized areas throughout the region.”

Bikes are allowed on the Going to the Sun Road before it opens to vehicle traffic. Check here for updates…